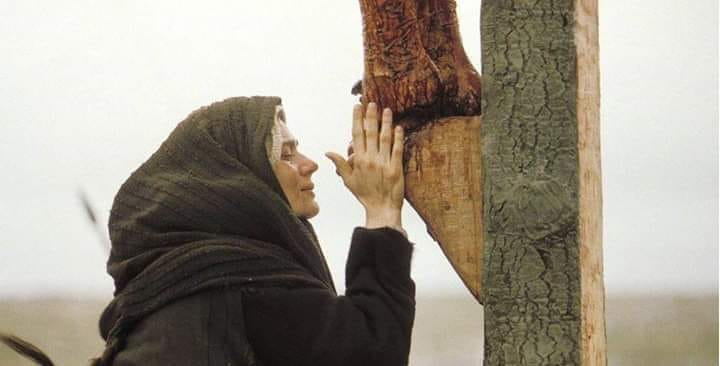 SHE IS THE WOMAN WHO BORE AND NURTURED THE SAVIOUR OF THE WORLD.

AND SHE IS WHO SHE IS.

A mother watched in pain as her beloved son’s clothes was ripped off his tired and weak body.

It felt like her heart had leapt out of her chest, as each lash from the lead-tipped whip hit and tore his fragile skin apart.

She wrapped her arms around her body, bursting forth in shivers; as she watched her son endure the burning pains from the long whip lashes.

She stared hard at the blood marks scattered across his back and wished to wrap him up in her arms.

She cried out in deep pain as they forced a crown of thorns on his head leaving drops of blood like rain droplets flowing freely over his face.

She wept her heart out as they mocked and pushed him from side to side like a common criminal.

She journeyed with him slowly as he carried his cross on his shoulders and this great burden to bear.

She became lost for words as she beheld her son wounded, alone and broken beyond words could say.

‘Was this really her son’?, she muttered through shivering lips.

She was once a young virgin girl who yielded to the voice of her heavenly father.

She lived through the shame and pain of carrying a child whose paternity was deemed questionable.

She carried God’s seed within her and brought him forth according to the time of life.

She nurtured and raised the son of God giving him a home and voice to fulfill his mission on earth.

But then, She is Who She Is

Just as he came into her life and brought her joy and peace, he was about to be taken away from her forever in the most disheartening way.

Here he was before her, stripped of his clothing, battered and bleeding, wounded and broken, hanging on a cross at Golgotha and about to draw his last breath.

She fell flat on the dusty hills of Golgotha, her fingers violently scratching the soil beneath her face.

She watched in dismay at what had become of her son and the tears gushed out like a river.

She wished there was something she could do to set him free and soothe his pain.

She called out his name one last time as she stared hard at his body covered up in his blood.

She wailed in deep anguish calling out her son’s name, wondering if anyone could help her ease this deep pain in her chest.

She is Mary the Mother of Jesus.

Heart-broken from the picture before her.

Wounded from the events of this unforgettable day.

She is at her tipping point and her world is crumbling before her.

She is that mother who watched her beloved son die to save the whole world from their sins.

She carried the savior of the world in her womb and watched him draw his last breath on the cross at Golgotha.

Can you imagine how she must have felt on that day watching her dear son die to save humanity on the cross?

Indeed it looked like all hope was lost. It looked like God had forsaken his beloved son. But then, something extraordinary happened on the 3rd day after his death. Jesus arose from the grave. And since that day, we have been set free.