My name is Oluwatosin Ajose Popoola and I am a lawyer. I have decided to share my C-section story for two reasons.

The first reason is to change the mindset that women who had children via C-section are not strong or ‘womanly’ enough. And the second reason why I decided to share my C-section story is to dispel the ‘Hebrew Women Myth’. For indeed it is a myth and not biblical.

On the 21st of August, 2015, I went to the hospital for a routine ante-natal checkup (although I had experienced pains the night before my visit). It turned out that I had been in labor all through the night. 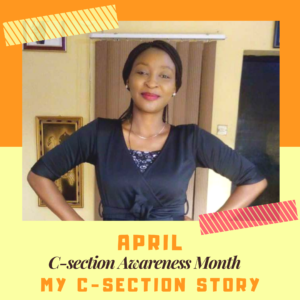 My doctor examined me and decided to carry out a scan. So, apparently I had a condition called Oligohydramnios. My amniotic fluid had diminished and he recommended that we carry out a C-section immediately.

Oligohydramnios is a deficient volume of amniotic fluid; it is associated with maternal and fetal complications.

In his opinion, I could be induced but the baby might sustain brain damage among other complications. A C-Section was the safest medical decision for me at that point in time.

I called my husband and elder sister. My husband was scared, apparently he had heard a lot of stories that women die in the process of C-section. Was I scared? No, I was not scared, not during the course of the surgery or afterwards.

Why was I not scared? I had read a lot about the procedure. I had faith in God and confidence in my doctor. During my routine ante natal visits, I had developed a relationship with him and I was certain that he would only take decisions that will be in my best interest.

Now, the major challenge I struggled with (which no literature prepared me for) was people’s perception of C- sections.  Some persons by their attitude and words made me feel that I was not strong enough to have gone through the ‘stress’ of labour, hence the reason for my C- Section.

A close family member even accused me of deliberately setting out to waste my husband’s money by having my baby via C- section.

Some said (because I’m a lawyer), I only ‘know book’ and don’t know how to be a mother. In their blinded opinion, vaginal delivery makes one a mother. This perception affected me mentally and reduced my self-esteem at that point in time. I guess it also affected my recovery.

When I was about to have my second child about 4 years later, I opted for elective C-section. This time around, I was armed with information and had heard stories of women who had successful C-sections.

I also worked on my self-esteem and further came to the realization that the method of giving birth will not determine my self-worth as a woman.

I know that I could have attempted to have a VBAC (Vaginal birth after Cesarean section), but what’s the point of putting myself through the stress of labour?

Now, this is the perk of having an elective C- section. I had the opportunity of picking a ‘convenient’ day for my procedure and at my instance, backed with my doctor’s advice. I chose to have my baby on the 2nd day of April, 2020.

The journey to recovery was fantastic. I deliberately chose to shut out all persons with wrong perceptions and focus on my baby. And in less than 24- hours, I was on my feet. Within 32-hours I was in a good enough shape to receive visitors, take pictures and take a short stroll in my ward. I was prepared both mentally and physically.

On both occasions, the emotion I felt afterwards was relief. Relief that the journey of 9-months ended successfully. Relief that my babies were healthy and not deformed in any way due to birth complications that could have arisen if I had chosen to labour and birth normally.

My final word would be that the method (be it Vaginal, Ceasarian, Adoption) of having a child is not important, no method is superior to the other. The important thing is the safety of the mother and child.

There is really no point insisting on birthing a child through vaginal delivery contrary to medical advice and ending up with a brain damaged child. It’s not fair on the child.

Please let us make smart decisions and as women, let us understand that we have a right to sign the consent form required for doctors to carry out a C-section. The choice is really ours to make and not any man.