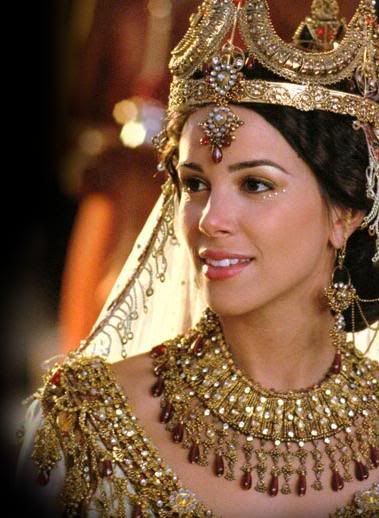 It was International Women’s Day some weeks ago and guess what the theme for this year is – ‘I CHOOSE TO CHALLENGE.’ There were also 5 women in the bible who chose to challenge tradition and leadership in their time.

But in the words of the organizers of the International Women’s Day :

It is true that we currently live in a world where women now have to navigate dangerous territories of gender inequality, racial discrimination, injustice and physical/sexual abuse on their own. The odds are against them as those entrusted to care for and look out for them have turned their back on them.

Many women now battle issues of racism, injustice, abuse and gender inequality on a daily basis. Imagine societies and cultures who still shame women and believe that women have no place or value to give in society. Or that women are not meant to be in positions of leadership and that their voices must remain faint or unheard.

Women Are Finding Their Voices

But the tables are turning with each new day. Today, we have women who are rising up to make a difference and speak out for the voiceless all over the world . Many women are challenging stereotypes and the status quo across the globe. They are also making their voices heard and showing humanity what value they have to give.

I would love to borrow a line from Sam Adeyemi who once asked this question – “Which of the challenges in your generation are you willing to confront?”

In other words, what will you choose to challenge?

I think of Malala, the young Pakistani girl who was shot at for her stance on the importance of educating the girl child. She survived and has become a voice to many young girls around the world. She chose to challenge.

It is time to rise up and confront some of the challenges confronting women around the world.

Of course, the bible is not excluded in all of these. Buried deep within the pages of the word of God, are stories of women who chose to challenge traditions, culture and injustice in their time.

These women chose to challenge and confront the injustice and inequality in their generation. One of these women even stepped into a role of leadership in a time when women barely rose to positions of national leadership. They were fearless women who stood up for what is right and wrote their names in the annals of history.

5 Women in The Bible Who Chose to Challenge Injustice, Tradition, Inequality and Leadership 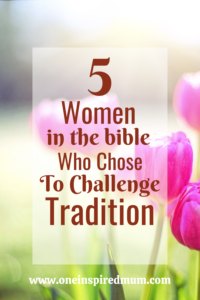 “Deborah, the wife of Lappidoth, was a prophet who was judging Israel at that time. She would sit under the Palm of Deborah, between Ramah and Bethel in the hill country of Ephraim, and the Israelites would go to her for judgment.” Judges 4:4‭-‬5 NLT

Deborah was a wife, mother and prophet who served as the only female judge during a lawless period in Israel’s history. She held court and judged between the people of the land just as Moses had done.

During this time in Israel’s history,  God’s children had stopped following God and walking in his ways, but she led them back to him. She distinguished herself in a male – dominated culture by leading with wisdom and faith. Because of her leadership, Israel enjoyed 40 years of peace. She challenged the notion that says that women do not belong in the place of leadership.

2. Jochabed (The Mother of Moses)

In a season riddled with fear, death and uncertainty, one mother defied the king’s order and hid her child away from the evil plan of the King.

The king at that time had ordered the killing of every male child born in that season. Yet, this mother looked beyond her present moment, saw into the future of what her child could become and went on to defy the king’s order.

Her courage continues to inspire many mothers around the world. She chose to challenge a leadership that was bent on ending her child’s destiny.

“For if you remain silent at this time, relief and deliverance for the Jews will arise from another place, but you and your father’s family will perish. And who knows but that you have come to your royal position for such a time as this?” (Esther 4:14).

These words were spoken to a young woman who had just become Queen. Esther was a beautiful young Jewish woman who was loved and favored by others. An evil plan was hatched by Haman to convince the king to destroy all the Jews in the land. Esther was a Jew and the destiny of her people was at stake.

She had two choices. One of which was to sit and do nothing. While the other choice was to defy tradition and go in to see the king in a season that was forbidden to plead on behalf of her people. Esther chose the latter. Her courage and influence saved an entire nation. She chose to challenge traditions and carved her name in history forever.

” But Ahaziah’s sister Jehosheba, the daughter of King Jehoram, took Ahaziah’s infant son, Joash, and stole him away from among the rest of the king’s children, who were about to be killed. She put Joash and his nurse in a bedroom, and they hid him from Athaliah, so the child was not murdered. 3. Joash remained hidden in the Temple of the Lord for six years while Athaliah ruled over the land.“ 2 Kings 11:2-3

Jehosheba’s brother who was King had died, and his mother was bent on ending his lineage. King Ahaziah’s mother immediately set out to kill and destroy the royal family so she could have full control.

But a woman named Jehosheba immediately conceived a plan to save one of her brother’s children. So, she took her brother’s young child, stole him from amongst his siblings and hid him away for six years.

Joash later became king and went on to reign for 40 years. However, his destiny and journey of becoming King would never be complete without the mention of Jehosheba. Her action enabled the line of David, through which eventually the Messiah came from.

Her bravery will always be remembered because she stood up and did something to preserve her brother’s lineage. She chose to challenge an evil plan against God’s purpose and plan for her nephew, Prince Joash.

5. The 5 Daughters of Zelophehad

” One day a petition was presented by the daughters of Zelophehad—Mahlah, Noah, Hoglah, Milcah, and Tirzah. Their father, Zelophehad, was a descendant of Hepher son of Gilead, son of Makir, son of Manasseh, son of Joseph. 2. These women stood before Moses, Eleazar the priest, the tribal leaders, and the entire community at the entrance of the Tabernacle.” Numbers 27: 1-2

These 5 sisters Mahlah, Noah, Hoglah, Milcah, and Tirzah were known as the daughters of Zelophedad. Their father had died without a male child and land was to be allotted among the tribes of Israel. Each male head of the household received a portion.

Their father had no male heir and was likely to be excluded from the land allotments. So, these sisters in a rare display of wisdom and humility stood before authority and asked for their right to inherit their father’s property. Their matter was taken before God and their plea was granted.

The daughters of Zelophehad chose to challenge inequality and injustice by making a case for fairness and equality. Their influence led to the making of a new law that allowed women to own land.

What will you choose to challenge as a woman. and mother in your generation?